Blood & Honey by Shelby Mahurin is the sequel to the popular Serpent & Dove. I was dreading it a bit since I heard mixed reviews about the book, but I actually thoroughly enjoyed it.

As with Serpent & Dove, I listened to the audiobook version of Blood & Honey, narrated by Holter Graham and Saskia Maarleveld. The author, Shelby Mahurin, grew up on a small farm in Indiana, where she lives with her family and pets while writing the next book.

So, this next part may contain spoilers about Serpent & Dove, the first book; if you haven’t read it yet, you can start here to find out why you need to start reading this series.

Read my full book review on Blood and Honey, or skip to the conclusion by clicking here.

After Serpent & Dove, Lou, Reid, Coco, Ansel, and Madame LaBelle are hiding in the forest. They’re hunted both by the Chasseurs, the King, and Morgane with her followers. So, the group needs some pretty strong allies. Unfortunately, this means the group has to split up, including Lou and Reid.

When they are together, Lou and Reid tend to fight a lot. There’s a lot of assuming of the other’s feelings, which is something you should never do. They still need to learn to communicate with each other.

The story itself was a bit slower than in Serpent & Dove, probably because they spend a lot of time getting their new allies. But, by the end, the pace picked up, and I had a hard time putting it down again until it was finished.

While I enjoyed the story, the climax of Blood and Honey was a bit of a letdown. There was a pretty cool showdown, but the way it resolved was a strange mix of unsatisfying and gut-wrenching. The emotional impact was definitely less than it could’ve been. Other than that, the ending itself was a great twist and made me want to scream at Shelby to finish the third book. I want to know what happens next.

Reid continues his denial and resistance to magic and witches. A lot of people found this annoying, but I thought it was very true to his character. Besides, it’s not that easy to put aside all your ingrained opinions and beliefs. And he does care a lot about Lou; their problem is that they don’t really communicate with each other.

So, Lou is going through a bit of a terrifying change, sacrificing more and more of herself to perform magic—all so she can save others. She’s still a badass and snarky, but with a more dangerous edge. Which, again, Reid and Lou aren’t talking about in a healthy manner, so a lot of miscommunications arise.

Next to the characters we already know, Blood & Honey has some new additions. Claude Deveraux is a particularly great addition. He’s witty and quite mysterious. We also get to meet the werewolves and the blood witches. They have some… interesting practices.

The world definitely expands: in Blood and Honey, we meet the blood witches, the camp where Coco’s from. We gain some insight into their practices and rituals and that Coco’s aunt is quite a b*tch. Also, we now know why they use blood for magic instead of something else and what the magic actually costs them. It’s well thought of and quite imaginative, in my opinion.

We also see the werewolves, and we find out there might be more male witches. How exciting! And since Lou tries to explain to Reid how to control his magic, we learn a bit more about how that works.

The writing was similar to Serpent & Dove: good prose that was easy to follow. Perhaps there was a bigger focus on the internal struggles in Blood & Honey compared to the previous book. All in all this made the book feel a tad slower in pace, and less things seemed to be happening.

I definitely felt excitement though, but more toward the ending. And not to worry: even though Lou and Reid are apart for a portion of the book, there are still some steamy scenes between them.

If you loved Serpent & Dove, you will love Blood & Honey. It is definitely a different experience than the previous book, as it seems to be more setting things up for the next book. But it’s still entertaining, has the steamy scenes between Lou and Reid that we love, and there’s a ton of magic and unexplored territory covered.

So I would definitely recommend it.

Have you read Blood & Honey? What did you think about it? 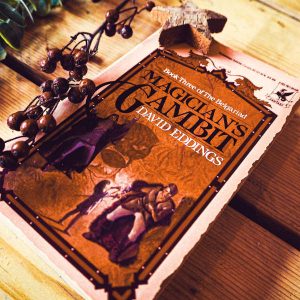