January 2021 Reading Wrap-Up: What To Read Next

Here’s my January 2021 reading wrapup! Can you believe the new year is already one month underway?

It was a good start; I’ll admit. I’ve finally figured out something I enjoy doing: editing other people’s stories. And so far, that has been going quite well. Reviewing all those books has certainly helped, ha!

So, what have I read in January, the first month of 2021? Let’s dive into those books!

So, read on for my January 2021 reading wrapup. 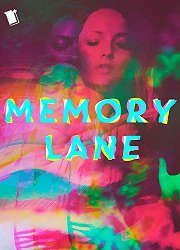 I received an ARC of Memory Lane through Netgalley in exchange for an honest review.

So, initially, the release date was set to January (which is why it was on my January 2021 releases list), but apparently, it’s been pushed back to December.

Memory Lane is a story about a strained mother-daughter relationship. This is about to change when Alex’s mother, Cassie, signs them up for a memory experiment. Some of Cassie’s most happy memories are transferred to Alex in an effort to grow closer to each other. To trigger the memories, they’re going on a week-long road trip, the same one Cassie went on in her memories. But things get a strange turn when Alex’s memories aren’t all happy and seem different from how Cassie remembers them. Who is the strange man Alex keeps seeing in these memories? And why does she remember being drowned?

The story itself is quite thrilling, with many cliffhangers and questions that you want to be answered. There are some decent twists and turns along the way, as things start to get more mysterious and sinister.

However, the book does read more like a screenplay than an actual book, with episodes instead of chapters. I don’t know if this will be changed in the final version of the book, though. But there was quite some dialogue and inner monologue, but minimal exposition. There weren’t many descriptions of what things looked like, where I think the story could have benefited from a clearer scene-setting. I also didn’t feel extremely attached to the characters. I liked Alex, we stay inside her head throughout, but I didn’t feel connected to her. I think it’s because the interactions between her and her mother are mostly dialogue and some internal reflection, but it’s missing some action. There’s too much being told to the reader instead of shown, which is why I felt more detached from the characters.

It was a fast read: I read the book in just one evening. So if you’re looking for a fun, thrilling, quick read with an interesting premise, then Memory lane would definitely do the trick.

Get on Bookshop
Get on Amazon 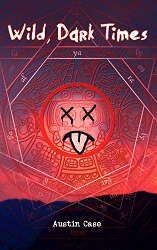 I received a copy of the book by the author in exchange for an honest review.

The story centers around Elizabeth Megalos, a disillusioned art-school grad who is now getting by as a bank teller in St. Louis. Suddenly, she’s attacked by one of her coworkers, who turns out to be possessed. Luckily, she’s saved just in time by a sorcerer named Eddy. He drags her along to recruit another unfortunate soul called Hugh. The three of them travel to Europe to meet Eddy’s magical friends, all to stop the apocalypse.

The story holds true to the title: they are indeed wild and dark times. It’s a nice story, with a good plot and some great twists, but it lacked a bit in the execution. There’s a lot of talking in between, where all the different magical things are explained. While interesting, it slows the pace of the story. I would’ve preferred if these things were shown to the reader, instead of reading about them in almost a lecture kind of way. I do appreciate the level of detail the author put into the world-building, though. It’s clear he knows what he’s talking about when it comes to mysticism and esotericism.

I liked the psychedelic elements and thought those were a nice touch. However, the characters spend a large amount of the story getting high, which at some point stops being interesting. It made it feel somewhat repetitive at times. The different kinds of symbolism throughout the story were clever and executed well in the plot.

Unfortunately, I couldn’t really attach to the characters. This is probably because of all the talking and the getting high, where nothing much seemed to really happen. This made the characters feel more distant. However, when there was action in the story, and the characters followed their next lead or performed a ritual, the scenes were well-written and packed with action.

I feel with a bit more focus on showing rather than telling from the writer (meaning: seeing events happen through actions by the characters, instead of being told of an event, for instance, through dialogue), this book would’ve been really great. Now, it’s definitely enjoyable, and I especially liked the twist in the end, but I can’t say I absolutely loved the book. 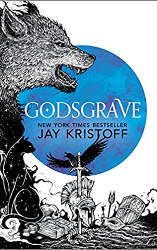 Oh my god, what a crappy way to end a book. Seriously, this story is so totally amazing, with extraordinary twists and great characters. And, naturally, it ends on a twist, so you kinda want to start reading Darkdawn immediately after reading Godsgrave (which I’m doing).

So, what’s happening in Godsgrave? The lovely Mia Corvere is now a Blade of Our Lady of Blessed Murder. However, many in the Red Church think she didn’t earn it. To prove herself, she executes her kills perfectly, even if she was placed in a backwater town of the Republic. However, this way, she’s no closer to her revenge: ending the men who destroyed her familia. The Red Church ministry even tells her Consul Scaeva is off-limits. But why? A deadly confrontation with an old enemy is the start of Mia’s growing suspicions. What are the Red Church’s motivations? Who can she trust? And how can she still get her revenge?

What I love about Mia is that she’s always saying to herself that other people aren’t her friends, always trying not to get too close. And yet always failing; her actions show quite the opposite from her thoughts. But will that remain throughout the entire book? Or will she grow darker and darker the deeper she gets into the conspiracies surrounding the Red Church? How much will she give up to have her revenge? To find that out… you should really read the book.

Jay Kristoff is a masterful storyteller, and I love the narration of the book. The little footnotes in between and the funny comments do add to the story. The world he created is so rich and full of detail, you can easily picture it. There is honestly not a thing that I don’t love about this book; it gave me all the feels, and the ending climax was absolutely perfect. 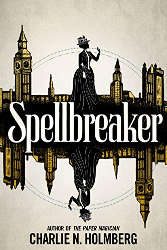 Spellbreaker tells the story of the orphaned Elsie Camden. She discovers she’s a Spellbreaker by accident: dispelling a rune in the workhouse, which prevents a fire from being put out. Not wanting to get caught, she aligns with an underground group she calls the Cowls. They help her use her spellbreaking to push back against the aristocrats and help the common man, just like Robin Hood.

But as an unlicensed Spellbreaker, using her gifts is a crime. She risks possible death every time she breaks a spell cast by a Spellmaker. To cast a spell, a person with potential needs to have enough money to buy the spells, making it largely unavailable to the lower classes. So, when the Spellmaker Bacchus Kelsey catches her, Elsie isn’t impressed by him at first. However, she needs to keep her secret safe, and so they strike a bargain. She’ll help Bacchus fix some unruly spells around his estate, and in turn, he doesn’t turn her in.

As they work together, her fondness for Bacchus grows, but so does her trepidation about the rise in the murders of Spellmakers and the theft of their spellbooks. Is it a mystery she can uncover? And will she do so before it’s too late?

I thoroughly enjoyed reading Spellbreaker; I ripped through it quite fast. The magic system is fascinating and a good choice to make class-divide a central concept of the story. The rich and powerful can become richer and more powerful by buying spells to absorb (if they show potential), while the poor need a sponsor to get higher up in life. Spellbreakers, however, get their gift at birth, so it’s more fairly distributed.

The story also takes place in Victorian England, near London, so it’s quite the romantic setting, which is perfect to see the blossoming courtship between Elsie and Bacchus, despite the circumstances of how they met.

So, long story short: I’d definitely recommend reading Spellbreaker if you love Urban Fantasy with a thrilling mystery, a courtship romance, and an interesting magic system. And, if you get it now, you’ll be ready for when the second book, Spellmaker, comes out!

New Posts on this Blog

🍁 Check out my book reviews for the Belgariad series by David Eddings. In January, I reviewed Queen of Sorcery (#2), Magician’s Gambit (#3), Castle of Wizardry (#4), and Enchanter’s End Game (#5)

🍁 I also updated my post on Bookmarks, showing some of my favorite bookmarks, both easy to buy on Amazon, and handcrafted ones by small businesses.

🍁 On nsmirage, Natalie has compiled a list of the 20 best Fantasy Quest books.

🍁 Amazingly detailed review of the Poppy War trilogy by Kate.

Well, that’s it for my mini-reviews for January 2021. I hope you enjoyed them, as well as the blog articles I suggested.

So, what will I be reading in February?

Well, after Godsgrave I desperately need to read Darkdawn. I’m also currently reading Spellmaker and going to read The Stolen Kingdom (both releasing in March). And I hope I’ll also have time to read These Violent Delights!

So, what did you read in January? Which was your favorite? And what are you planning to read in February?