Welcome to the June 2021 reading wrapup.

Admittedly, I didn’t read a lot of books this month.

Tat’s mostly because both of the books were pretty big tomes (especially Empire’s Ruin).

However, both books were really great and I am glad I read them. So, look below to find out the books I’ve read and reviewed and pick up your own copy!

The Sightless City by Noah Lemelson 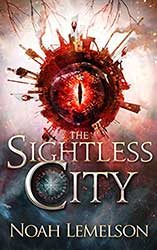 I received an arc from Netgalley in exchange for an honest review.

The Sightless City by Noah Lemelson was a treat to read. It was a highly imaginative story, filled with intrigue and suspense.

The story takes place in Huile, a city that runs on eather-oil, a highly coveted substance. Here Marcel Talwar lives, a war hero turned private investigator. After receiving some strange engineering diagrams, he is set on a trail to uncover some of the deepest secrets of the city. But what he finds might bring him in more danger than he realizes.

Sylvaine, a ferral living in Icaria, has the lifelong dream of becoming an engineer. The only problem: ferrals don’t have the ‘knack’—the ability to use aether to manipulate metal. Fortunately, an opportunity arises, and she’s given a drug that can help her free her gifts. It’s all she needs to make her dreams come true. But at what cost?

The story utilized many different POVs. However, this is built gradually, and the main focus remains on Marcel and Sylvaine.

The author made the choice to have the reader be knowledgeable of the plan (or parts of it) before Marcel or Sylvaine, which creates a different kind of reading experience as if we had learned along with the two protagonists.

I think it was a good choice, as it gave more insight into that part of the intricate world Lemelson has built. In addition, I thought reading the antagonistic POV was interesting and entertaining as well.

Speaking of the characters, they were developed really well.

I loved how Lemelson addressed Marcel’s PTSD—it’s clearly there, but it doesn’t make him stronger or weaker. It’s just part of who he is. On the other hand we have Sylvaine, who is deeply insecure. All she wants is to be accepted and prove she is good enough. It’s truly heartbreaking to read how she’s treated in some of the scenes or how she views herself.

However, what makes this story truly stand out is the unique and thorough “magic” system. It’s an interesting blend of magic and science, where aether can be explained through mathematical equations, simply affecting the molecules, while at the same time some of the people seem to be using it in a dark magic kind-of-way.

Moreover, the city of Huile and Icaria had great detail to them, giving the story a true steampunk vibe.

Besides being entertaining, the story also has a deeper meaning. The economic and political situation of Huile rings very true, where business and politics merge together all to gain more power, and a city is only saved because of the aether-oil in the ground. It’s all about power.

In addition, as is a common theme in SFF stories, is acceptance of those who look different. In The Sightless City, mutants live among humans. However, many of them are treated poorly compared to humans (Sylvaine is a prime example of this, even held in lower regard than mutants).

As you can see, a lot of good stuff which would give any reader a lot to consider, all wrapped up in a great story.

If you love great characters, a compelling world with intricate details, and a good crime story with a great deal of danger: I’d highly recommend The Sightless City. 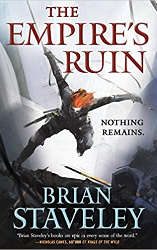 I received an arcy from Netgalley in exchange for an honest review.

I thoroughly enjoyed reading The Empire’s Ruin by Brian Staveley, and I’m very much looking forward to the sequels.

Here’s what the book’s about:

The advantages used by the Annurian Empire for millennia have fallen to ruin. The Empire is disintegrating. The ranks of the Kettral have been decimated from within, and the kenta gates, which grant instantaneous travel across the lands, can no longer be used. One of the surviving Kettral needs to voyage beyond the known world through a land that warps and poisons all living things to find the nesting grounds of the giant war haws: it’s the only way to save the empire. And a monk turned con-artist may hold the secret to the kenta gates. Time is running out. Because, next to it all, an Ancient God-like race has begun to stir.

The story picks up immediately, with the first bloody fight already starting in the first chapter. The Kettral try to rescue their captured friends and a huge fight breaks out.

There are more than one POV in the story (which can be expected when the book is over 700 pages). We are first introduced to Gwenna, one of the Kettral, a group of highly trained mercenaries that serve the Annurian Emperor.

The other person is Ruc, someone who grew up in with the Vuo Ton in the Delta, an extremely dangerous place with many beasts that can kill you. He made a decision to move to the city years ago and became a priest for a different god than the Three. However, when he hears news that his birth place might be under attack from a ruthless Lord claiming to be the First God, he feels the need to go back and help out. Even if that means he needs to go back into his violent mindset, something he’d shaken from him when he moved to the city.

And finally, we also meet Akiil. He’s a con-artist with big plans: conning the Emperor herself. He’s one of the last Shin monks after his temple was attacked, killing the rest (including the Emperor’s brother). He promises to teach the Emperor how to use the kenta, rings that allow you to transport from one place to the next. There’s one problem, however: he doesn’t actually know how to use them.

While there’s a lot of action in the story, it’s also very character-driven. I would say one of the best parts of this book were the characters and their relationships. All the characters were incredibly rounded and gave life to the story.

Next to that, the world is also incredibly vast and is rich in detail, but it’s always shown in an interesting way rather than just info-dumping it on the reader.

In my opinion, what elevates books from being ‘just fun’ to ‘amazing’ is when they have great underlying themes that are discussed. The Empire’s Ruin definitely has those.

There’s a lot of focus on dealing with failure and overcoming fear of failure, in addition to loyalty, leadership, and the power of love. Further on in the book I could also discern a comment on consumerism and how the hunger to consume makes monsters of us all, but that might also just be my interpretation.

🍁 If you enjoy a good murder mystery set in a steampunk-vibe world with a protagonist who has an interesting power–to “talk” to the dead–then you should check out The Witness for the Dead.

🍁 For a short review on The Iron Raven: is it worth reading this spin-off or not?

🍁 Check out this list with books set in Japan (or inspired by).

🍁 If you also love dystopian fiction, don’t miss this booklist with some dystopian book recommendations.

🍁  I absolutely devoured horror books when I was younger (though not so much anymore these days). If you’re looking to add some more great horror stories to your reading list, check out this list with horror books coming out in 2021.

I hope you enjoyed my reviews or any of the other recommendations and blog-posts I linked here in my June 2021 reading wrapup. I hope it helps you choose your next read for July.

So, what will I be reading in July?

For one, I will finish The Empire’s Ruin.

In addition, I have two arc of books releasing in August, Nolyn and Light Chaser.

Most likely, those will keep me occupied, but otherwise I hope to finally continue the Storm’s Rising series.

What books did you read in June? Any favorite? And what are you going to read in July?

2 thoughts on “June Reading WrapUp: What To Read Next?”