Sign up for the newsletter & challenge yourself with the SFF Bookish Bingo printable. Get new inspiration & recommendations straight to your inbox.

Unfortunately, March was a pretty slow reading month for me, so I only have two reviews for you. I also took a much needed break at the end of March, where my partner and I rented a vacation house for a few days. It was great to be away from home, even if it was only for a short time.

So, I feel pretty refreshed!

But, enough of that, let’s see what I did read:
Penumbra, a Sci-Fi LGBTQ Romance, Revolution-type story, and Max and the Spice Thieves, a Middle-Grade Adventure Fantasy. 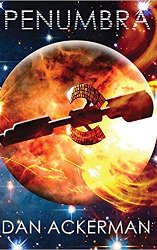 I received the eARC of the book from Netgalley, in exchange for an honest review.

Penumbra is an interesting story, tackling some important and relevant themes. It definitely had parts I liked, and some things I disliked. Mostly, it was a bit long and a bit much, and at times dragged too much for my taste.

The story’s about Arden, the Autarch (aka ruler) of Eden, a space station that’s floating over a dying planet. It’s a station with an oppressive class system, where the refugees had been given a debt they’re forced to pay off by working for so little wages they can never dream of getting rid of it. The rich are quite content with the system and aren’t keen on making concessions. However, Rhys, one of the workers, has earned Arden’s trust. Together, they’re on the verge of making some unpopular changes. It’s not just about disbanding an unfair, oppressive system. If nothing changes, Arden might not have a station to rule over if shortages continue.

As I said: Ackerman tackles some important themes in Penumbra. The political indenture system is still used in some countries today. It’s basically a modern kind of slavery. So it was very interesting to see how things unfold in the story: how the workers slowly get a sense of agency and how Arden slowly sees the wrongness of the system.

Arden’s love life felt like it was somewhat reflective of the relationship between the rich and the slaves. The better that relationship, the better Arden’s relationship. However, due to the large focus on the romance, it also felt that the story progressed very slowly. On top of that, Arden’s partner switched halfway through the story, and I didn’t quite understand that choice.

I did like that Arden is a transgender character, and that he has same-sex relations; we all need to read more diverse stories. Penumbra is definitely a good example of that. I didn’t quite like his character, though. I understand that he’s highly anxious and has some serious issues, but he seemed to act quite whiny and petty at some points, only to be completely in control and mentally healthy the other. The switches sometimes seemed to me more a means to progress the plot than his actual character progression.

The worldbuilding, however, was excellent. The space station is detailed, the political and economic systems made sense, and we get enough information on the background without being too much or boring.

So, when should you read this book?

If you enjoy a thought-provoking space story with a diverse protagonist written by a non-binary author, with a focus on politics and revolution, along with a heavy dose of romance, definitely give Penumbra a try. 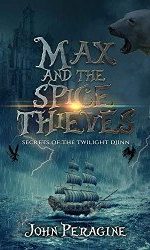 I received the eARC of the book from Netgalley, in exchange for an honest review.

Max and the Spice Thieves is a nice story, with plenty of adventure and good worldbuilding. However, I wasn’t a huge fan of the writing.

The story is about Max Daybreaker, whose mother suddenly goes missing. Lucky for him, a crew of Spice Pirates, led by Captain Cinn, offer to help Max with his quest, crossing the three seas. He gains even more unlikely allies: a teenage warrior queen, a three-eyed seer, and an assassin spy. They face treacherous lands with shape-shifting bears, an ancient witch, harpies, and the Djinn, who will stop at nothing to enslave the world. The further Max gets in his quest, the more secrets he learns about his past. Powers start to waken within him, forcing him to question everything he knows.

The story in Max and the Spice Thieves has all the adventure you could want. There’s an evil prince, Snow Bears, a Witch, and of course, the Djinn. We experience a few different places in the story that were all imaginative and detailed. It’s a real ‘love conquers all’ type of story.

Max is a brave kid who just wants to save his parents. However, his magic felt somewhat random, and the way he thinks shifts a lot between adult and very young kid. I didn’t actually think he changed all that much throughout the story. It was also unclear whether he thought his father was dead or not, which really decreased the impact of some of the twists in the story.

I did love Captain Cinn, the pirate that takes care of Max when his mother goes missing. He tries to do what he can to keep Max safe. He’s not a typical pirate, and I thought that was refreshing.

There is some blurred line in the story between ‘good’ and ‘bad,’ which I can appreciate, but it was also a tad confusing. And since this story is targeted at children, they might find it confusing too. One such confusing thing was the Witch. When we first learn about her, she’s described as an evil being. However, later on, she’s also considered helpful. In fact: she’s the only one they can go to for help. So, what is she? Whose side is she on?

I feel it’s these kinds of ambiguities in the story that let it down.

Another thing that let it down was the dialogue—it didn’t feel real to me. Often, Max would also think something and immediately say it, which I felt slowed the pace. The dialogue was also often used to explain things, which led to some info dumps that weren’t quite interesting.

Max and the Spice Thieves is an entertaining adventure story that I do believe kids will enjoy. It’s fun, and it’s easy to read. If you don’t mind the writing being a tad clunky and do love reading about witches, shapeshifting creatures, and interesting worlds, then you should definitely give the book a try.

🍁 Like a Fantasy Romance with an epic fantasy tale, but don’t feel like reading an entire series? Check out this review for The Stolen Kingdom.

🍁 What exciting books are coming out in April? Check out this list with 20 of the best SFF books!

🍁 After Elsie and Bacchus find out who is behind all the murders of the Master Spellmakers, they now have to find a way to stop them once and for all. Read by review of the 2nd Spellbreaker book: Spellmaker.

🍁 Like your books dark, twisted and violent? And your romance threading that thin line between love and hate? These Violent Delights is the book for you.

🍁 Do you have some strange reading habits? Any that you recognize on this list?

🍁 Did anyone say dragons? Read this review of Shadow of the Gods.

🍁 If you’re interested in more diverse releases: check out this booklist.

🍁 Instead of fantasy romance, let’s go for alien romance. Check out this list with some great alien romance books.

I hope you enjoyed my reviews or any of the other recommendations and blog-posts I linked here in my March 2021 reading wrap-up. I haven’t done a lot of blog hopping recently, so that list is a bit short.

And, hopefully, I’ll get some more reading done in April.

So, what will I be reading in April?

I’m still listening to the audiobook of Darkdawn. I’m taking it reaaaaaal slow with that one. I just kinda don’t want it to end. Other than that, I’m planning to read Viscious by V.E. Schwabb, I’m reading Celestine for the May book releases, and I got The Call, the first book of an epic fantasy series from the authors to review.

It’s quite the list, so I don’t know why I’m still typing; I better get to reading!

Anyway, what did you read last month? Any favorites? Any books from my reads that seem interesting to you?

Sign up for the newsletter & challenge yourself with the SFF Bookish Bingo printable. Get new inspiration & recommendations straight to your inbox.

Thanks for visiting my little bookish corner on the internet. I’m Iris Marsh, a passionate reader and writer. On here, you can find full book reviews, along with monthly mini-reviews, new releases, and more bookish stuff. If you want to know more about me, just click here.

Why does an author hire a line editor?

January 5, 2022
Read More »
Menu
Hi! I’m Iris Marsh, your bookish friend. Please join me in conversations about books: one of my most favorite things in the world. Read more about me here.