May Reading Wrapup: What to Read Next

Welcome to the May 2021 reading wrapup.

While it’s actually already halfway through June (I’m starting to sense a theme in that regard), I figured I’d still post the books I read.

Because I read some really good books!

I had planned on posting it last week, but I was so insanely busy that it just… well, it didn’t happen. 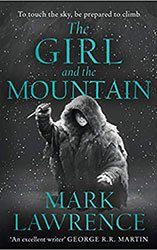 I’ve waited a year for the sequel, and I was not dissapointed!

Yaz has challenged the authority of the priests’ rule, who steer the fate of the ice tribes using their Hidden God, magic, and iron. After being torn away from a life she knew, she forged a new path for herself. But now she’s once again lost: she lost her friends and is faced with her enemies. And she has a mountain to climb. Can she break the Hidden God’s power, defeat the priests and find the green world in the south?

This time around, we start the story from three different viewpoints. The chapters are from Yaz’s, Quell’s, or Thurin’s point of view (at least for the first half of the book). I felt this was a good choice, as it provided a more comprehensive view of the mountain and everything going on.

The only thing that was somewhat annoying was that sometimes when the viewpoint switched, some events were repeated. Only very briefly summarized, but it still felt redundant.

What was interesting was that about halfway through the book, it actually felt like an ending. Lawrence could’ve easily said “The End” at that point, and I would’ve accepted it. However, I’m glad he didn’t! It’s always nicer to get even more of the story, right?

I did feel, though, that the actual climactic ending was, in fact, less climactic than the climactic moment in the middle of the story. But that can just be me.

In the Girl and the Mountain, we also get even more details about the world. Some of these won’t come as much of a surprise if you’ve read The Book of the Ancestor, but other details actually expand even on that part of Abeth. It’s clear to see Lawrence has developed these details not just in this book and the previous trilogy in this world but also from his books set in The Broken Empire. Lots of sci-fi additions make the book really blur the lines between fantasy and science fiction, which I enjoyed immensely about this book.

If you’ve read The Girl and the Stars (and if not, read it), you won’t be disappointed with the sequel. It’s promising to be a great trilogy where magic and science come together, and Yaz and her friends have to survive in a harsh environment. Thematically, I feel it calls into question what it means to be human. But, more importantly, that we should consider if perhaps the people we consider ‘broken’ aren’t the most powerful of us all. 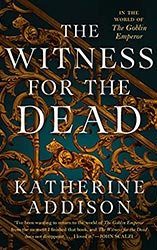 I received an Arc from Netgalley in exchange for an honest review.

So, while it says it’s #2, it’s actually a standalone novel. But it is set in the same world as The Goblin Emperor. In that first book, Maia, the young half-goblin emperor, wanted to know who had killed his father and half-brothers, and then he turned to a Witness for the Dead named Thara Celehar.

This book centers around him. Thara Celehar lives far from courts, in somewhat of a quasi-exile, serving the common people of the city. His duty is communicating with the dead. Still, Celehar will follow the truth wherever it leads him, no matter who may be implicated in the murder, fraud, or ancient injustices.

I finished this book in only two days. Just to paint the picture more clearly: on average, a book like this would take me a week or so.

Make of that what you will.

I have to admit; I did have to get into it at first. The language use, difficult terminologies, and overly formal dialogue threw me off. However, once I got into it (and luckily, the dialogue wasn’t always that formal), I was hooked and found it very difficult to put the book away. Hence the two days.

There is just always something about murder mysteries that I find irresistible. I just had to find out how every single plotline would fit together. Because yes, there’s not just one murder. Celahar has more than one person to Witness for (and that’s not even mentioning the monsters he has to face).

It felt extremely satisfying to watch those plots weave themselves together, all the way to the final climactic moment, and we find out what actually happened. The ending in itself was satisfying but bittersweet.

Celahar was also a very likable character. He wants to do the right thing and make sure the dead have their justice. At the same time, he’s very self-conscious, always expecting people to think the worst of him and being afraid. It broke my heart a little bit each time he felt surprised that someone would actually treat him with kindness and gratitude.

There’s a theme of acceptance running through the thrilling events taking place—accepting those who are different and the consequences when this isn’t there. At least, that’s what I took away from it. Along with the question if someone is necessarily a monster if they did a monstrous thing.

If you enjoy a good murder mystery set in a fascinating magical world, with likable and memorable characters (although all have difficult names), you won’t be disappointed with this one.

The Wrath of the Tooth Fairy by Sarina Dorie 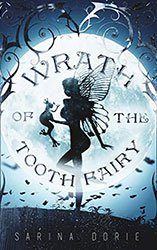 I received an Arc from Netgalley in exchange for an honest review.

Mira could never understand why princesses should have all the fun—why can’t fairy godmothers enjoy a Prince Charming? Unfortunately, that affair costs Mira both her job and reputation. Cast out of the fairy realm, she’s reduced to working as a tooth fairy, waiting 99 years for her chance at redemptions. She’s so close to reaching her goal when all of a sudden, a bogeyman starts haunting her. Desperate for a good night’s sleep, Mira takes drastic measures, even dating the Prince of Darkness, Aden.

This entire book was such a breezy read. It was funny and, at the same time, engaging, keeping me interesting in solving the mystery. Admittedly, the plot points were fairly obvious; there weren’t any shocking twists. There was also some repetitiveness going on, which slowed down the pace at times.

Still, the story did keep my interest. I think mostly due to the unique voice the author used for Mira. I found her to be a very likable character. She’s kind toward the poor children she encounters in her work, often going the extra mile to help them. Also, she just keeps doing her best to move on and to get her place back, proof that she is worthy, but at the same time, she’s holding herself back.

I think that’s a universal phenomenon. Especially when we focus on fear, which is exactly the focus of this book. We all feel we need to suppress these fears and not pay attention to them. But what if we did? Can our fear help us overcome our problems? Would accepting our fear help us defeat it?

I also enjoyed the side characters, from the ‘Prince of Darkness’ Aden, who is actually a decent and kind man, to bogeyman Jack, who keeps showing up in her dreams and at her work. Sometimes the bogeyman seems nice and caring. Other times he uses his magic to terrify her as a form of therapy. The other tooth fairies were also a good addition to the story, all with their own personal traumas they had to overcome.

All-in-all it was a very imaginative and fun story. If you’re looking for a break from the more serious high fantasy books, I think Wrath of the Toothfairy is a great read, even if the writing could’ve been a bit better and less repetitive.

🍁 Looking for an Epic Fantasy series with Elves, Humans, Half-Elves, Orcs, Wizards, and all that stuff? Check out The Call. 🍁 What’s gonna be new in June? Check out the 19 Best New Fantasy & Sci-Fi Book Releases of June 2021 🍁 Vicious is the perfect book if you like your protagonists a bit more dark and twisted and love a story with a comicbook vibe.

🍁 I really loved this insightful review of This is not the Jess Show.

🍁 If you’re looking for some beach reads, then check out this list.

🍁 I love podcasts, so I’m definitely checking out this new bookish podcast.

🍁  If you’re in the mood for a thriller with twisty friendships, look at this list.

I hope you enjoyed my reviews or any of the other recommendations and blog-posts I linked here in my May 2021 reading wrapup. I hope it helps you choose your next read for June.

So, what will I be reading in June?

Well, I’ve started on The Sightless City, which is proving to be an intruiging detective story set in a very imaginative world.

I also have The Empire’s Ruin on my list, which I’m very excited about.

Both these books are upcoming releases in July!

Next to that, I’m going to continue my journey in the Storm’s Rising series.

What books did you read in May? Any favorite? And what are you going to read in June?

2 thoughts on “May Reading Wrapup: What to Read Next”